The FZ solo in the BSTM version is in fact pieced together from 5 edit sections: 2 sections from Oct.31 and 3 from Oct.30.

During the solo the film stays in 10 31 a few seconds after the audible splice to 10 30 in the soundtrack, with a shot of Tommy Mars lighting a cigarette.

In that first section of the guitar solo from Tiny Lights the film only has three shots: Bozzio wearing nothing but black shorts, FZ playing (these first two definitely match the music) and then a short shot from the back of the stage of Patrick, Adrian and Tommy playing the vamp, which could be from a different night that the music, as Patrick seems to be playing a bass fill in the soundtrack that we don't see him play.

As I recall there is also a change from 10 31 to another night in the film somewhere in the middle of the Black Page/Jones Crusher/Broken Hearts/Punky's sequence, so my guess is FZ did have the band wear the same clothes for all shows.

In fact the Tiny Lights solo in the film has five segments. Here is a rough breakdown of where the parts appear in the audience tapes:

I'd like to say a few words about Warner Bros. Uh, when I first signed with the label I thought that I was going to have a pretty good deal but later when I discovered the relationship between Warners _____ the implication of their behavior and I . . . I jus— excuse me I think I'm gonna have to WHOO-AARGH!

Remember, I WAS SIGNED WITH WARNER BROTHERS FOR EIGHT FUCKIN' YEARS!!!

Here we have the president of Warner Bros. Records, the head of the Warner Bros. legal department, and two famous attorneys from Gang, Tyre & Brown. Okay. Give him his contract!

[...] I think the edit on the movie is at the first bass note (13 seconds into the chapter), since the 10/31 dance contest participants are still visible during FZ's guitar intro.

On the CD, however, the edit seems to be at the beginning of the track.

Adrian Belew, "How To End Up Wearing A Dress On Stage In A Concert Film With Frank Zappa," Elephant Blog, September 28, 2007

this one is more serendipitous.
to begin with your first road manager
has to kill himself
(see Anecdote # 37 blog from August 15.)
then, he has to be replaced by a road manager
of a different stripe: the "Road Mangler"
which is the title Phil Kaufman goes by.

Phil is an extraordinary person with a colorful past.
friends with Charlie Manson, before the massacre.
friends with the legendary Gram Parsons.
at Gram's insistence Phil agreed
to burn Gram's body out in the desert
if he were to die.
they made a pact.

a few years later
Gram Parsons died,
Phil stole his body,
drove it into the desert,
and promptly burned it.

you meet Phil after his prison tenure
and find him to be one hilarious fellow.
dressed in his best Harley garb,
he has (at that time) a knack for staying
completely smashed on booze
and yet doing his job very thoroughly.

one morning at breakfast with Phil
the waitress asks for his order.
he replies, "I'll have a Turkey Club."
the waitress says,
"I'm sorry sir, we're only serving breakfast,
no sandwiches until lunch."

"it's a type of whiskey, dear", he informs her.

next, you have to be fortunate enough
to take part in one of frank's annual rituals:
the Halloween concert in New York City
at the ancient Palladium Theatre.

since it is halloween
Phil will look after the costuming
for willing band members.
and since you are already in a costume of sorts
(a paratroopers jumpsuit bought
at an Army/Navy store on Melrose Ave.)
you're happy to oblige.

as it happens the entire concert is being filmed
to be released as a live concert film called baby snakes.
so when Phil shows up late in the afternoon
with your costume you try to put on a brave face.
the costume he's chosen is a WAC uniform
(a female military outfit from the 40's)
which matches your paratrooper jumpsuit
and just so happens to fit you perfectly.

at some point during the evening's concert
you find yourself offstage
changing into the WAC uniform.
the film crew surrounds you as you don
the now-infamous $500,000 Jimi Hendrix strat
and step back onto the busy stage
in front of 2,000 people
and a host of lights and cameras.

it's at this precise moment you realize:
you're wearing a dress. 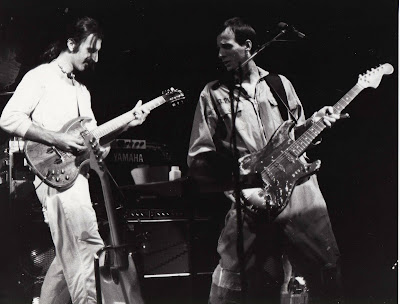 ps: the Stratocaster I'm playing in the photo above was owned by Jimi Hendrix.
he burnt it up at the miami pop festival in 1967.
somehow frank inherited the guitar which was in 3 pieces,
had it put back together, and set up for slide playing.
I played it in the song jones crusher.
recently dweezil zappa auctioned off the guitar at Sotheby's in London.
it sold for 350 thousand pounds or a whopping $500,000!
I should have carved my name and number on the back.

These text portions are from October 30:

These text portions are from October 30:

FZ: The name of this song is "San Bernardino"